Well, I've tried and tried again ( as per my Mother's recommendations )
but I cannot love the 7130v. After two months of persistence, tears and
a H*U*G*E volume of dropped calls and simple fade-out, I've reverted
back to my trusty Nokia 6021.

Switching the Vodafone SIM to the Nokia was pain-free, and I was able to
participate in an hour-long conference call with no dropped connection;
the call quality did fade at one point but I simply walked from one side
of the house to the other ( interestingly switching telephone STD codes
during the process ).

Will need to download and re-discover the joys of the Nokia sync.
process with Lotus Notes, but c'est la vie.

Sorry, BlackBerry, I did try - perhaps another phone would've done it
for me, but the affair is over.

During the final shake-down of a "reconditioned as new" PC at the weekend, I was very frustrated to find that Windows Update refused to, er, Update Windows. I got no obvious error message; it would list the fixes, and then simply fail to install them.

As always, Google had the answer, Google is my friend. I dug around and found this: -

In essence, after installing Service Pack 3, there seems to be a problem with the module C:\Windows\System32\Wups2.dll.

It's necessary to re-associate this module with C:\Windows\System32\Regsvr32.

Building on the success of the first event, the IBM Lotus techies are running another LTJ event in September. The agenda is being polished up, but it'll be similar to this: -

This will be a technical session, aimed at technical people or, in the words of the invitation, those who are: -

or simply Wowed by Widgets

As per my earlier posts, I'm in the transition phase from Windows to Ubuntu Linux. One of the final challenges was that I had to boot into Windows in order to use WebSphere Portlet Factory Designer.

Well, one more obstacle has been removed with the recent release of WebSphere Portlet Factory 6.1.

It's worth noting that IBM does not formally support WebSphere Portlet Factory on Ubuntu - the two supported Linux platforms are: -
as per the Announcement Letter here.

In my particular case, I'm using WebSphere Dashboard Framework (WDF), which extends WebSphere Portlet Factory (WPF) with a set of dashboarding capabilities, including my favourite - the Summary and Drilldown builder.

I went to the software catalogue, and searched for WebSphere Dashboard Framework. This returned: -

and downloaded the latter as C1J1FML.zip.

It's worth noting that the Linux version is way smaller than its Windows counterpart, because IBM does not package Eclipse or WebSphere Application Server Community Edition with the Linux download.

Therefore, I needed to download and install Eclipse 3.3.2 before proceeding.

I made a few mistakes here; I used Synaptic Package Manager which installed a slimmed down version of Eclipse, which didn't include the necessary Java development tools.

In the end, I downloaded: -

I then extracted Eclipse into /opt/eclipse: -

Once this was done, I extracted the WDF ZIP file into /tmp to find two files: -

The .bin file should be an executable file - in my case, ls -al WDF.bin returns: -

which meant that I had to change the file attributes to make it so: -

before I could execute it: -

The GUI installer is pretty simple, and merely asks for two locations; one for WPF ( /opt/IBM/WebSpherePortletFactory ) and one for Eclipse ( /opt/eclipse ).

I've taken screenshots of these, and will upload them when I get some time.

Having completed the installation, I was able to use WPF/WDF to create a project, model etc.

My next challenge is to install WAS CE or similar as a J2EE runtime/test environment.

For those of you who have followed this blog over the past few months
will know that I've been moving to Linux as my primary desktop OS,
albeit on a Thinkpad.

Well, I'm finding that I'm spending more and more time in Linux, with a
corresponding decrease in the amount of time I spend using Windows.

There are still a few things that I need Windows for, but the list is
shrinking.

As of right now, I'm running Hardy Heron, and am writing this blog post
using Thunderbird 2.0.0.14. I'm connected via a Vodafone 3G card, using
their beta drivers - configuring the latter was a moment's work ( I just
needed to nab the APN username and password from my Windows boot ).

I've also got the beta of VMware Workstation 6.5 for those absolutely
crucial Windows applications ( with a nice little WinXP VM ) and am also
using Skype to "phone home".

Now does this mean that I don't really need a Mac ? Probably not but
want trumps need.

Not sure ? Then check out an article by my colleague, Paula Dantas,  here on Advisor.com.

It's a great article about a great product.

Having spent much of last week and the weekend installing the shiny new code, I spent two most excellent days with a client, helping them get up-to-speed with WebSphere Portal Express 6.1.

That was Monday/Tuesday. Here I am again on Wednesday doing the same thing, but with a different client in a different part of the country.

In the words of Lt. Columbo, "Just one more thing" ... one of my colleagues mentioned that the WCM templates didn't appear to exist in version 6.1 - well, they do, but you've got to know where to look: - 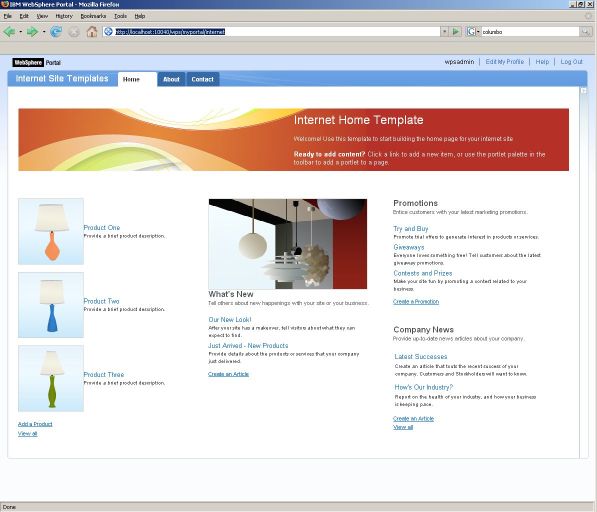 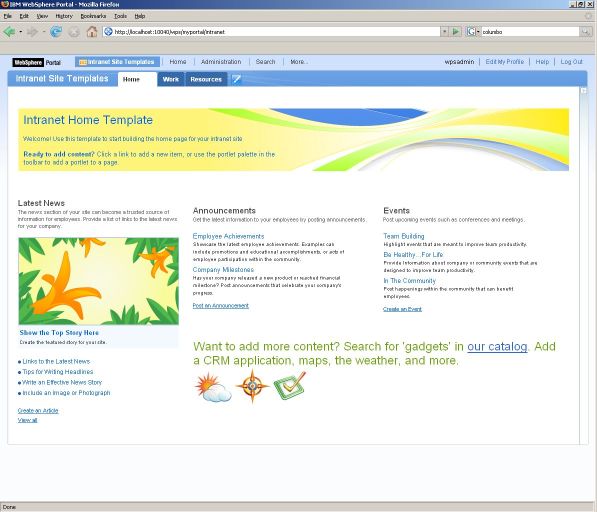 Well, I downloaded WebSphere Portal Express 6.1 on Wednesday ( having been travelling on Monday/Tuesday ).

I did my first installation at about midnight on Wednesday, which was possibly a mistake 'cos it failed. However, the second installation ( 0600 on Thursday ) worked OK; the major difference was that I manually truncated the WAS node name from my 8-character hostname ( STARGATE ) to 5 characters ( STARG ). I've seen this cause issues in the past with other versions of WebSphere Portal and Workplace. I believe it's due to path names being created that exceed Windows 256-character limit ( bear in mind that I am installing on Windows XP for my demo environment ).

Another observation was that the installation SEEMED to take quite a while - 2.5+ hours on a VMware image. However,  I'm using a beta of VMware Workstation 6.5 running under Ubuntu Linux, and I know that the beta has logging enabled.

I did another clean installation this AM, directly onto my Thinkpad T60p running Windows XP. This time it took 1 hour and 15 minutes, which is more acceptable - and similar to WebSphere Portal 6.0.

Once installed, the new Web 2.0 look n' feel is rather lovely, and the pages are now pre-cached, meaning that they load immediately.

Finally ( for now ) I configured Portal to use Domino 8 as a LDAP repository. For the first time ever, I relied solely upon the wizard, and was very impressed. I did, however, note one point to be aware of - WebSphere Portal now uses WAS realms for LDAP etc. and the realm can contain a base distinguished name ( think of this as the starting point for a LDAP search ).

By default, Domino places groups outside of the normal organization structure e.g. CN=wpsadmins rather than CN=wpsadmins, O=ibm. Therefore, setting the base DN for the realm to be O=ibm means that portal cannot find the administrative group, causing it to fail to start. I re-ran the wizard, and left the base DN blank, with the result that portal now starts and authenticates correctly.

Therefore, two lessons to be learnt: -
More fun to come ....

Portals provide an integration point for front and back end business applications, data and processes, personalized to each user. IBM WebSphere Portal extends the portal concept with support for content management; simplified usability and administration; search and indexing; open standards; and security. Come and learn how you can integrate new or existing applications using Portlets and the services provided by the WebSphere Portal Server.

This workshop is for ISVs who are interested in developing Portlets to enhance their applications and to facilitate integration in a customer's WebSphere Portal environment.  Participants should have some experience in writing and deploying Java™ Web applications. The labs sessions will show how to use Rational Application Developer and WebSphere Portlet Factory to develop portlets.

This workshop will be a traditional classroom workshop with live instructor and lab machines provided.

There is no charge for the workshop but participating ISVs are expected to register for the IBM WebSphere Portal Business Solutions Catalog offering before the workshop, and to nominate their Portal solutions for inclusion in the catalogue. Participants in the catalogue offering gain:
What you will discover by attending the workshop:
Highlights
Prerequisites

This workshop is intended for IBM Business Partners. Customers may be accommodated on a space available basis.

Participants should have: d

Check out some of these resources: -

After installing IBM WebSphere Portal version 6.1 with WebSphere Application Server version 6.1.0.15 or 6.1.0.17, a critical update to the IBM Java SDK is required on Microsoft Windows, Linux, or IBM AIX operating systems. This update is not installed by default nor available from the installation media. 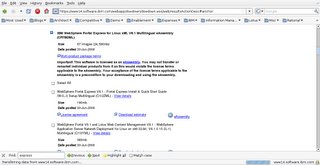 I will be downloading later today - am currently using a hotel's wifi and I don't think they'd thank me ( and don't know that I have enough time/patience left to wait).